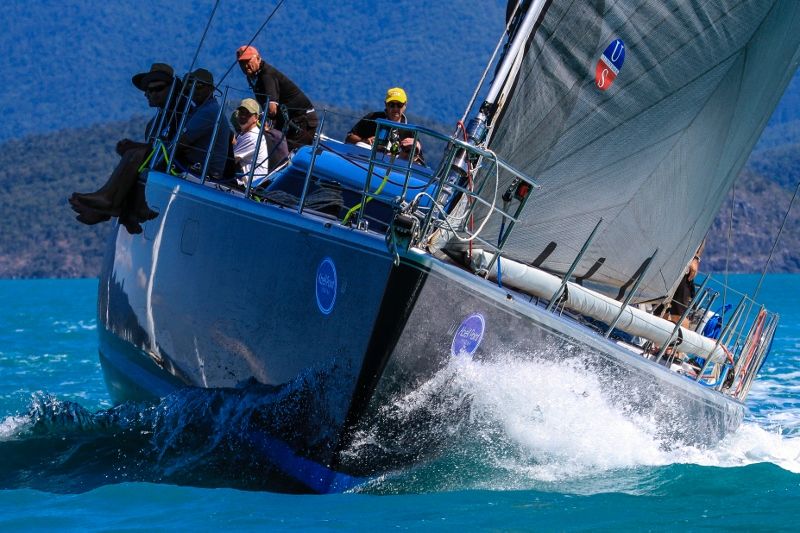 The battle lines are already being drawn as the two Sydney-based Cookson 50s, Colin Woods’s Pretty Fly III and Darryl Hodgkinson’s Victoire, prepare to take each other on, boat against boat in regatta racing.

The boats lined up at the start of last year’s Rolex Sydney Hobart Yacht Race and never let go of the challenge of being the best at the end of the 628 mile. Victoire came out the winner of that challenge, taking out both the coveted overall handicap trophy and IRC Division 0, while Pretty Fly III had to settle for a well-fought 10th overall on IRC and second to Victoire in Division 0.

To rub salt into the Pretty Fly III wounds and proving Victoire was not a one-time winner when it comes to long offshore races, Hodgkinson’s team went on to take handicap honours in the second longest Australian ocean race, the Mount Gay 40th Gosford Lord Howe Island Race.

On the race track at Airlie Beach, however, Woods and his Pretty Fly III team intend stamping into the Race Week record book their dominance of the Cookson 50s.

“We actually wanted to beat them to Hobart. As luck would have it, they had their luck and also sailed very well and deserved to win.

“We are going to pull them back this time, well at least try,” Woods said.

He knows Pretty Fly III can take on Victoire whether they are racing long offshore or inshore passages. “The boats are very close. It depends how well you sail them on the day and how much luck you have. They are pretty much identical boats,” he added.

Hodgkinson, while stating he wants to spend more time enjoying his racing now that he has achieved the pinnacle of offshore racing in Australia, still can’t help voicing his competitive nature. “We are looking forward to racing against them. We are similar boats. It will be very boat on boat. That’s fun too. I think that adds a lot to it.

“We will rise to the challenge,” Hodgkinson said.

With the two owners claiming the boats are similar, the differences are going to be in preparation, crew work and Race Week course knowledge.

As the teams continue their congenial banter on the dockside at the Cruising Yacht Club of Australia in Sydney, the owners have chosen different Race Week preparation paths. Hodgkinson is competing in his club’s winter series and will then quietly slip up north.

After a lay-off from racing since late last year, Wood intends shaking off the cobwebs with a few home club winter races before contesting the Land Rover Sydney Gold Coast Race.

Hodgkinson last year raced with an unconventional crew of four regulars and seven sailors from his international plastic surgeon peer group. This year he will have his four regulars back, another four visiting sailors from Sydney and three or four Airlie Beach locals. Woods is going with the usual race crew which includes a few local sailors.

What’s then left is the team’s knowledge of the course area which includes several challenging long courses and just a few windward/leewards. Both owners agree that with a bit of wind, the long courses will see the Cookson 50s revelling in the conditions. The short Pioneer Bay races will come down to crew work and working the bullets off Mandalay Point and Funnel Bay.

No doubt both owners will be looking to the locals on board to add valuable input and a winning difference to each team’s performance.

In the meantime, there is still plenty of opportunities for both teams to wind each other up before they hit the start line in Pioneer Bay at Airlie Beach on the 9th August.

The Notice of Race and the online entry for the nine divisions is at www.abrw.com.au. Entries close Friday 1st August 2014.